Artificial intelligence artist and creator Str4ngeThing imagines contemporary NIKE apparel as digital art in the renaissance period, brushing against the galleries and works of the Old Masters. The AI artist even replaces the subjects with his portraits while wearing complete Nike attire. At first glance, he might seem to be out of place, but slowly, viewers can see how he just fits in the historical era. Talk about shaking things up, and Str4ngeThing takes time-traveling to a new level with his AI-generated art touching on fashion phenomena. 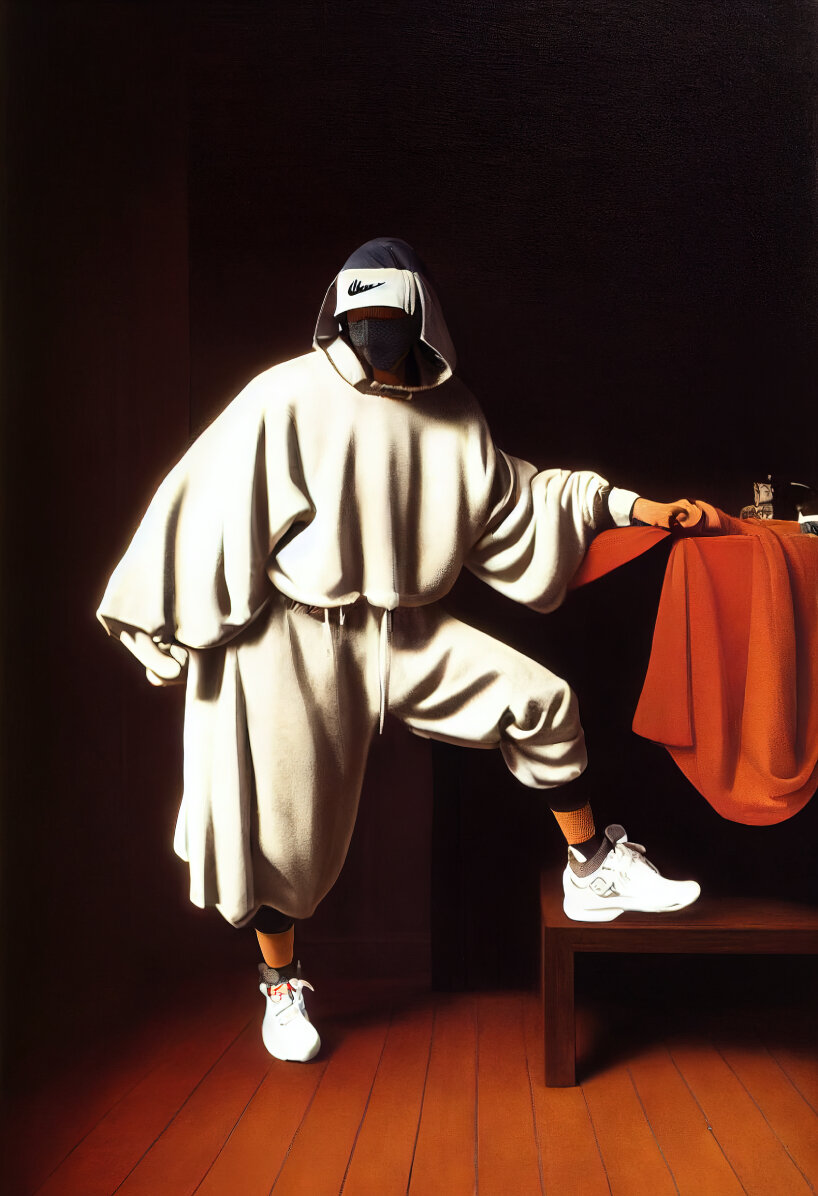 
No one can know the real name of Str4ngeThing other than his immediate circle. He writes that it’s a top secret along with his location. It’s safe to say that he exists in the digital world, creating online art through his newfound tech power. He names his art collection ‘WR0ng ER4’, an anthology of what Nike clothing existing in the past based on the conspiracy of the Mandela effect, or false memory. 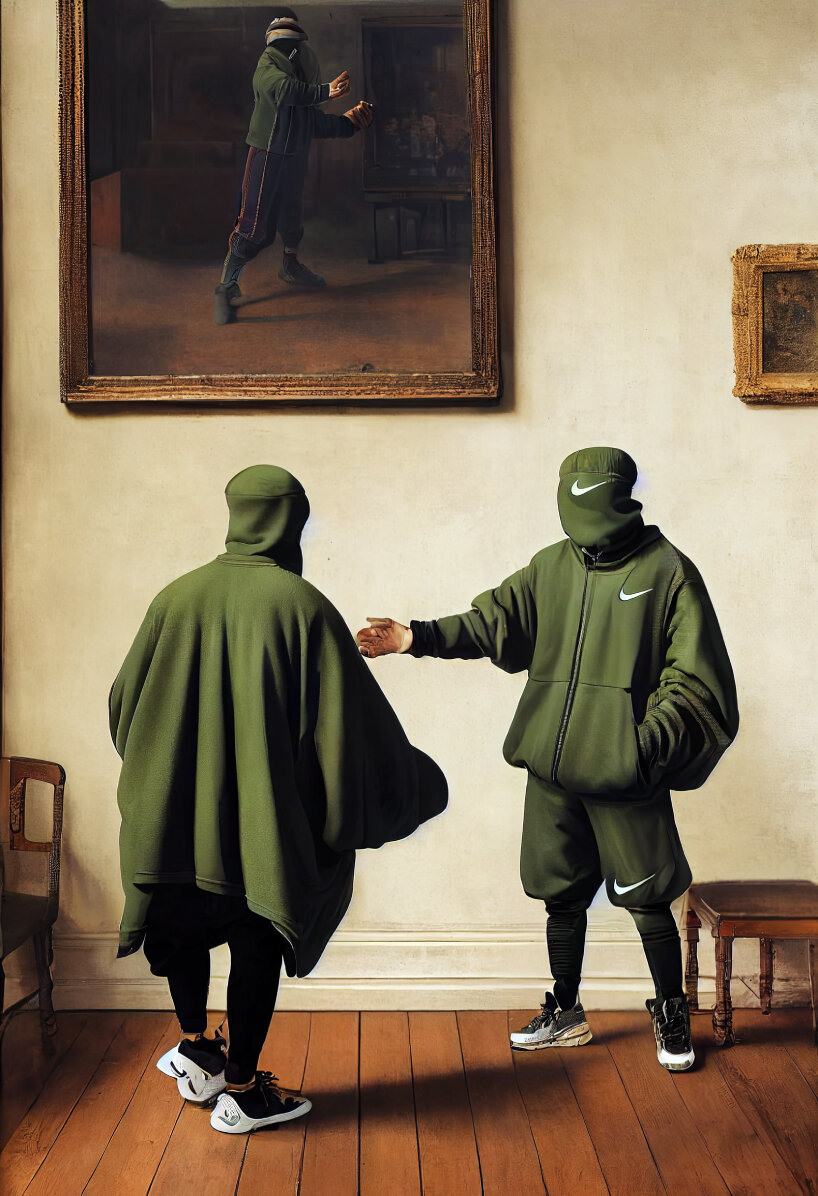 Str4ngeThing captures the attention of the viewers as he tries to twist the established fates and chucks Nike and its clothing staples lightyears before today to reinstate that perhaps these items have always been a part of one’s culture throughout the ages, but only today that people notice them through his renaissance masterpieces. Call it deja vu or an I’ve-seen-this-before moment, the artist and creator is ready to toy with everyone’s perception. 
From oversized hoodies and sweatpants to robes that look like a cardinal or pope could wear them, the outfits mimic streetwear that halts people in their steps. Bright orange, lush maroon, and rich green compose the palette that the artist and creator has picked, and adding the signature check of Nike is a cherry on top. Wearing these Nike AI art outfits while strolling in the street might stop content creators, shove their mini microphone to the wearer’s face, and ask them all random questions possible, either related to the outfit or what trends they want to splat or hop on. 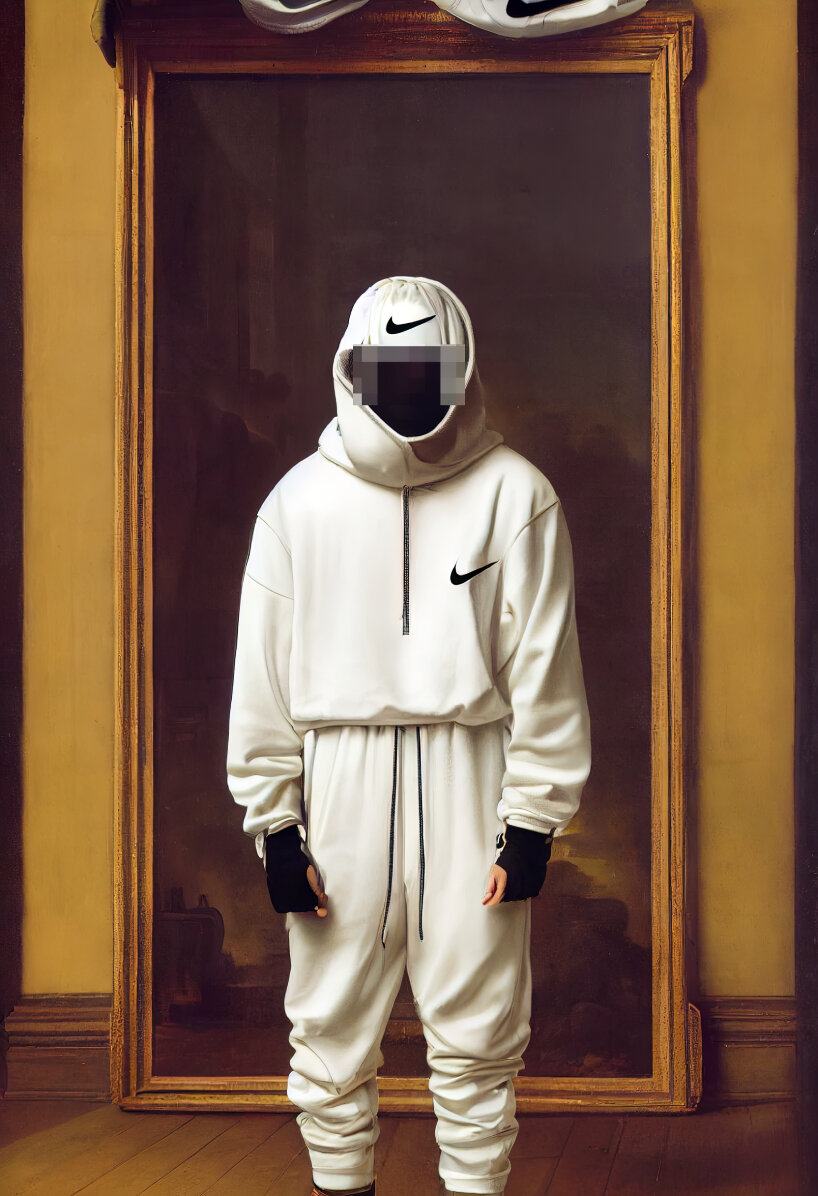 Str4ngeThing is playing with the fire of fashion using AI photography, inspired by the Renaissance period from its colorways and architecture to the masters of art in the era. His works can be seen as high fashion, and people seem to want the artist and creator to go out of his way to turn his photographs into real products. One commenter in one of his Instagram posts writes that he followed Str4ngeThing when he only had around 1,000 followers and checking back three days later, the following spiked to 7,000+. 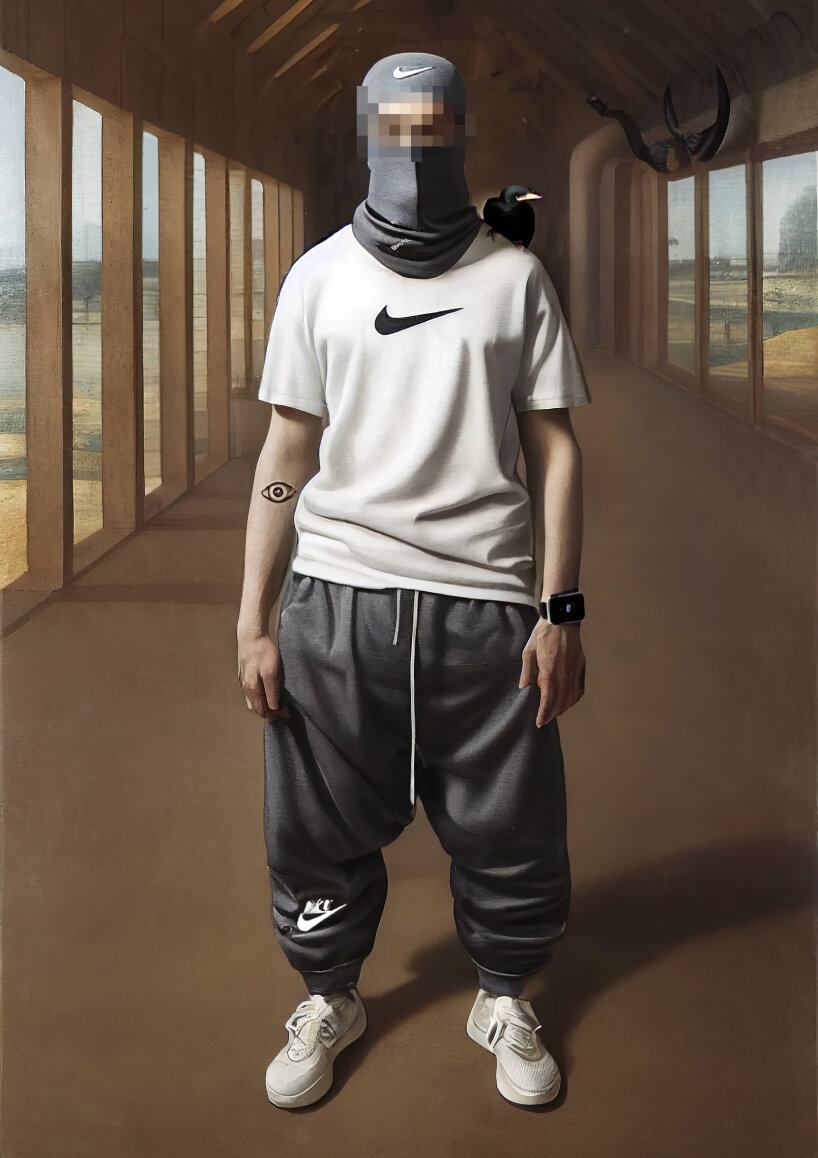 
People have taken notice of his AI-generated art, and Str4ngeThing is showing no signs of slowing down. He wants to keep celebrating fashion brands as part of everyone’s culture for so long and reimagines them in different eras. For whoever has said that a fashion trend pops up at the wrong time, Str4ngeThing might just prove that it is not the time’s fault, but the design. 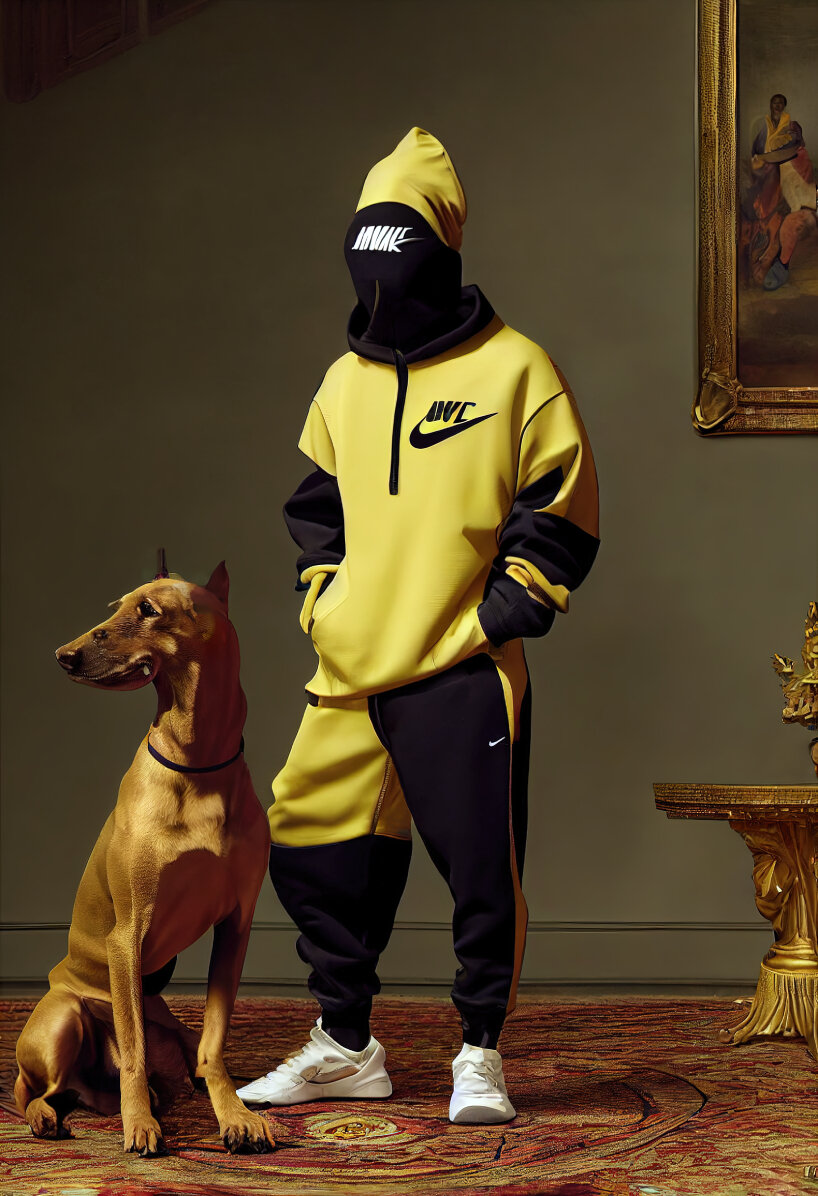 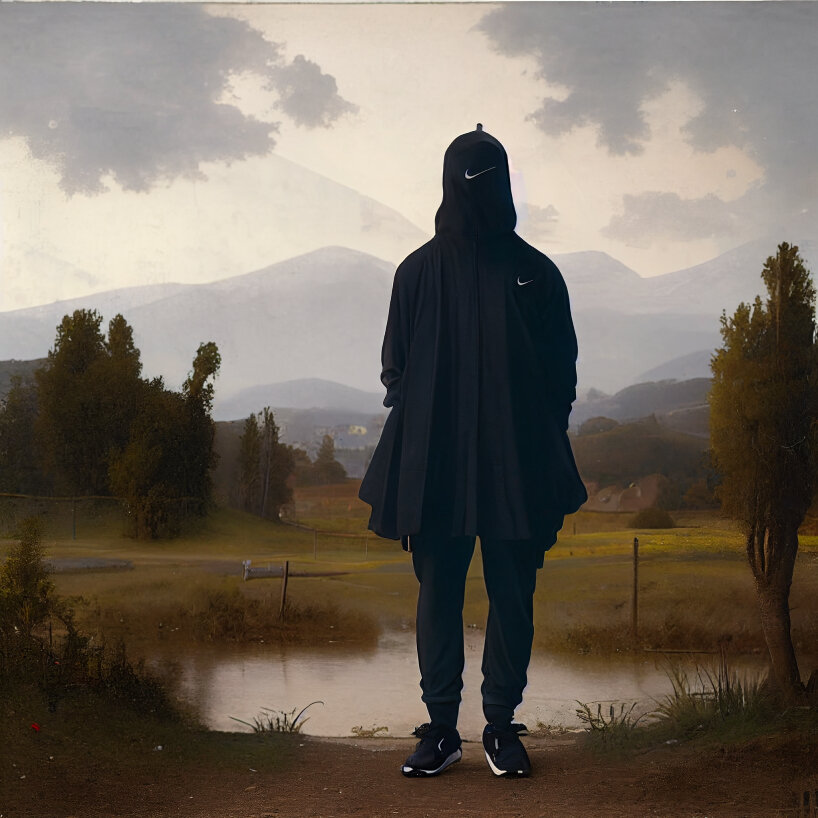 Str4ngeThing, Hoods in the Autumns 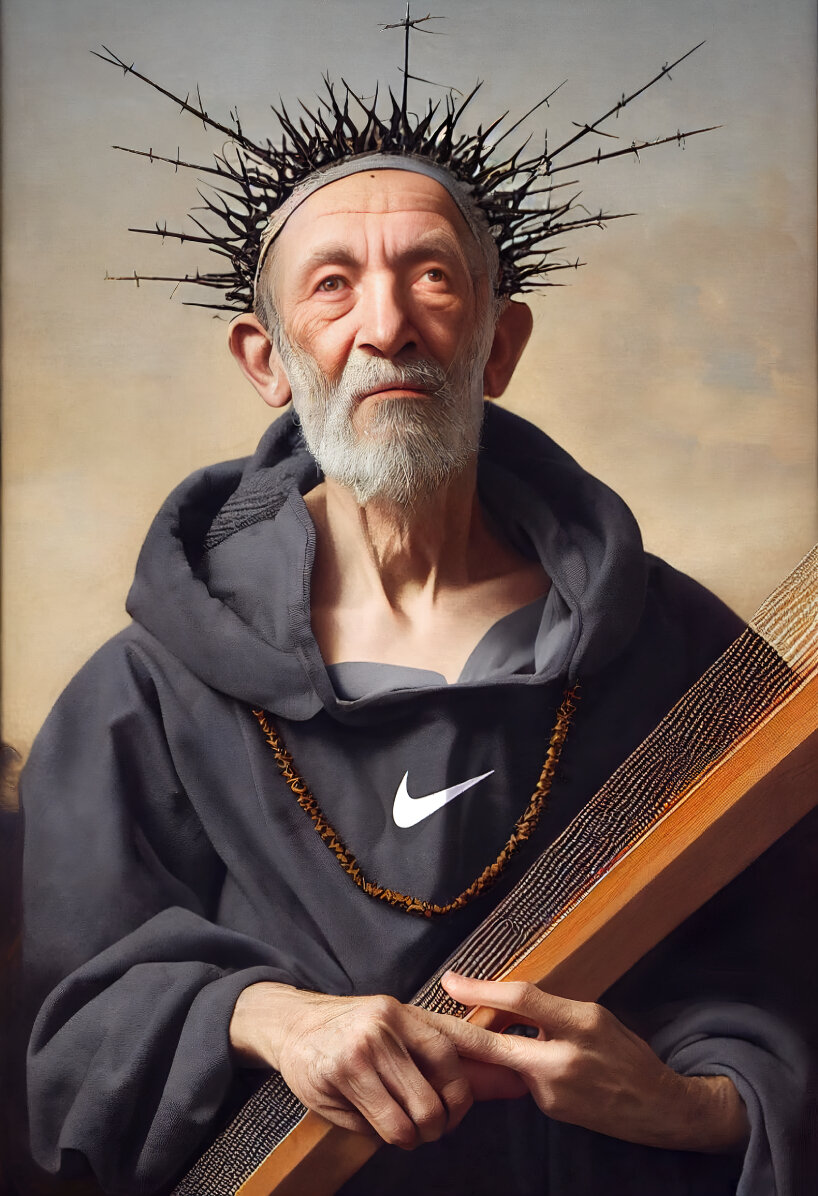 name: AI Art
artist: Str4ngeThing
company: Nike
a diverse digital database that acts as a valuable guide in gaining insight and information about a product directly from the manufacturer, and serves as a rich reference point in developing a project or scheme.

The Romantic Artist Is Dead. AI Has Killed Him – MutualArt.com
X