The realization of how mistaken I’d been hit somewhere around page 24 when the author details slipping into a psychotic state where he believed he was the returning Messiah. You see, my purchase of Andy Dunn’s Burn Rate was primarily to be supportive (I like him), and this past spring, it went from its Amazon package to a ‘Later’ pile in my office. Last weekend, the yellow-covered memoir moved from that stack to my hand. And then I proceeded to binge-read Andy’s memoir.

Wow, I sound like a cynical asshole for sure, but societal issues are frequently represented and explained not by the individuals who are most qualified to speak, but instead the people who have the means, access and ‘camera ready’ soundbites. And in doing so they distort the discussion, push aside others, and are ultimately extractive before moving on. The best version of these folks actually do want to help (and yes, I assumed Andy was in this group), but they’re still misunderstanding the impact of grabbing the mic versus using their status to elevate others.

Before I hit publish on this, there were two things that especially stood out for me:

A) Family is everything. The family Andy was born into, the one he extended into via marriage, the one he’s creating with his amazing wife and child. 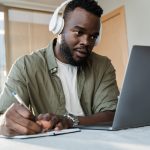 How To Conduct A Valuation Of Your Startup

What Is and Isn’t Covered by Workers’ Comp?

How to Create the Perfect Product Page
X