India’s antitrust watchdog has hit Google with a $113 million fine for abusing the dominant position of its Google Play Store and ordered the firm to allow app developers to use third-party payments processing services for in-app purchases or for purchasing apps, the second such penalty on the Android-maker in just as many weeks in its largest market by users.
The Competition Commission of India, which opened the probe into Google in late 2020, said mandating developers to use Google’s own billing system for paid apps and in-app purchases through Play Store “constitutes an imposition of unfair condition” and thus violates provisions of the nation’s Section 4(2)(a)(i) of the Act.
The regulator — which interviewed several industry players, including Paytm, Zomato, Info Edge, Samsung, Vivo, Xiaomi, Microsoft and Realme as part of the investigation — said that Google not using its billing system for its own apps such as YouTube amounts to “imposition of discriminatory conditions.”
The investigation also concluded that:
Mandatory imposition of GPBS [Google Play Billing System] disturbs innovation incentives and the ability of both the payment processors as well as app developers to undertake technical development and innovate and thus, tantamount to limiting technical development in the market for in-app payment processing services. in violation of the provisions of the Act. Thus, Google is found to be in violation of the provisions of Section 4(2)(b)(ii) of the Act.
Mandatory imposition of GPBS by Google, also results in denial of market access for payment aggregators as well as app developers, in violation of the provisions of Section 4(2)(c) of the Act.
The practices followed by Google results in leveraging its dominance in market for licensable mobile OS and app stores for Android OS, to protect its position in the downstream markets, in violation of the provisions of Section 4(2)(e) of the Act.
Different methodologies used by Google to integrate, its own UPI app vis-à-vis other rival UPI apps, with the Play Store results in violation of Sections 4(2)(a)(ii), 4(2)(c) and 4(2)(e) of the Act.
India is Google’s largest market by users. The company has poured billions of dollars in the South Asian market over the past decade as it aggressively searched to find major untapped regions worldwide to supercharge its growth.
The company reaches nearly all of India’s 600 million internet users. Android commands 97% of the local smartphone market. Its payments app, Google Pay, is the second largest payments on the UPI network, an infrastructure built by a coalition of banks that has become the most popular way Indians transact online.
The antitrust watchdog has directed Google to introduce a series of changes to its Play Store policies, which as with allowing developers to use third-party billing system, requires compliance within three months:
Google shall not impose any anti-steering provisions on app developers and shall not restrict them from communicating with their users to promote their apps and offerings, in any manner.
Google shall not restrict end users, in any manner, to access and use within apps, the features and services offered by app developers.
Google shall set out a clear and transparent policy on data that is collected on its platform, use of such data by the platform and also the potential and actual sharing of such data with app developers or other entities, including related entities.
The competitively relevant transaction/ consumer data of apps generated and acquired through GPBS, shall not be leveraged by Google to further its competitive advantage. Google shall also provide access to the app developer of the data that has been generated through the concerned app, subject to adequate safeguards, as highlighted in this order.
Google shall not impose any condition (including price related condition) on app developers, which is unfair, unreasonable, discriminatory or disproportionate to the services provided to the app developers.
Google shall ensure complete transparency in communicating to app developers, services provided, and corresponding fee charged. Google shall also publish in an unambiguous manner the payment policy and criteria for applicability of the fee(s).
Google shall not discriminate against other apps facilitating payment through UPI in India vis-à-vis its own UPI app, in any manner.
“The Commission hereby directs Google to cease and desist from indulging in anti-competitive practices,” CCI said in a statement Tuesday.
Google and Apple have faced heat from developers globally in recent years for requiring them to use their own billing systems and hence accruing considerable commission. In response, Google has started to explore offering developers in some markets including India the ability to use third-party payments system for purchases on Play Store.
Last week, the competition regulator fined Google $161.9 million for anti-competitive practices related to Android mobile devices and made a series of stringent redressal measures.
The watchdog was investigating whether Google had assumed dominant position in five different markets: licensable OS for smartphones, app store, web search services, non-OS specific mobile web browsers and online video hosting platform in India. Google was dominant in all of those relevant markets, the regulator concluded.
The antitrust watchdog said that device manufacturers should not be forced to install Google’s bouquet of apps and the search giant should not deny access to its Play Services APIs and monetary and other incentives to vendors. Amazon told the regulator that over half a dozen hardware vendors had indicated that they could not enter into a TV manufacturing relationship with the e-commerce group over fear of retaliation from Google.
In response to the last week’s order, Google said CCI’s decision was a “major setback for consumers and businesses,” opened them to “serious security risks” and will raise the “cost of mobile devices for Indians.”
Google said Tuesday its legal team is evaluating the order and had no immediate comment. It expressed concerns about the evidence the regulator relied on to reach its conclusion, CCI said in the order. 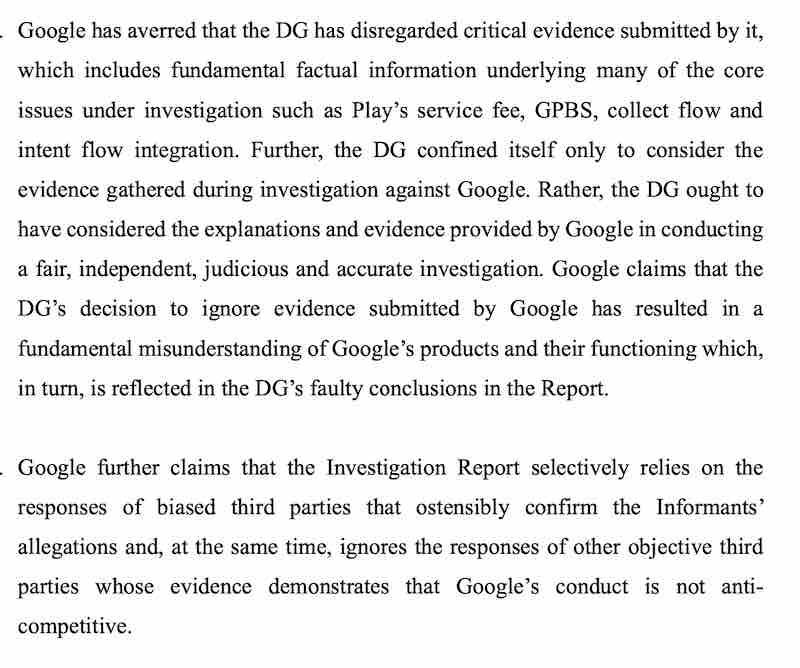 Google’s pushback on the evidence the competition regulator relied on to reach its conclusion. From the page 177 of the order.

Google’s pushback on the evidence the competition regulator relied on to reach its conclusion. From the page 177 of the order.
In a statement Wednesday, a Google spokesperson said: “Indian developers have benefited from the technology, security, consumer protections, and unrivaled choice and flexibility that Android and Google Play provide. And, by keeping costs low, our model has powered India’s digital transformation and expanded access for hundreds of millions of Indians. We remain committed to our users and developers and are reviewing the decision to evaluate the next steps.”

Where is virtual capital for African startups being invested? – World Economic Forum