Dear Reader,
Just before the U.S. Thanksgiving holiday, Tesla quietly dropped a technology “bomb” in the form of its latest self-driving software.
Full self-driving (FSD) beta version 10.69.3.1 was released about a week ago to a large number of beta testers and has since been made available to about 50% of Tesla drivers who’ve paid for the FSD software.
The expanded access is an indication of the remarkable advancements in the software over the course of the last few months. Tesla owners have been posting videos of origin-to-destination drives with no interventions at all.
Below is a quick snapshot of the latest software in action:
A Driver Uses Tesla’s FSD Software

Source: YouTube
Most drives have been less than 30 minutes in length, but I saw one that was a two-hour trip completely hands-free. This is the end goal of Tesla’s FSD software – and something that I predicted at the end of last year would become available by the end of 2022.
Almost all of the executives in the automotive industry have continued to insist that FSD – level 5 autonomy – is still years away.
And most tech journalist won’t even write about Tesla’s developments right now given their current hatred for Elon Musk. After all, if Elon Musk allows free speech and freedom of thought on Twitter, then journalists lose their ability to control the narrative.
And yet Tesla just released one of the most amazing tech breakthroughs of the entire year last week. It’s also on track to release Version 11, which will be available to all Tesla owners in December. Haters or not, it’s happening. And it’s awesome.
The reason that this is such a big deal is that Tesla’s approach to autonomous driving is starkly different than that of other major players like Waymo, Baidu, Cruise, or Motional. Tesla has been solving for the grand challenge of general-purpose full autonomy in any condition, on any road.
Other players spend immense amounts of time creating very detailed maps of specific metropolitan areas and then using those to launch a city that’s geofenced – meaning vehicles can’t leave the pre-programmed area.
Tesla is using artificial intelligence (AI) in such a way that it can think and adapt to driving conditions like humans. And once it turns on its FSD software to all drivers in the U.S., it means that every city and town in the country can be navigated in FSD mode.
The convenience and safety improvements that this breakthrough will confer are measurable. About 94% of traffic accidents – resulting in millions of deaths per year – happen due to driver error. Unsurprisingly, accidents began to climb after smartphones gained widespread adoption.
So just think about how many lives will be saved thanks to FSD… yet so many still want to hate on Musk.
And Version 11 is just the beginning. The same software will be used in Tesla’s Semi – a class 8 commercial truck. In time, these will become driverless and will greatly help to offset the remarkable shortage of drivers experienced in the U.S. market today.
But the big master plan that no one’s talking about is Tesla’s ability to launch a ride-hailing service that will allow Tesla owners to opt-in their Teslas when they aren’t using them.
Imagine pressing a button on your smartphone once you arrive at work and instructing your car to “get to work” while you’re at the office.
A Tesla will have the ability to go out and earn money when not in use, and I expect that the earnings will be enough to pay the monthly financing of the car.
If the cost of ownership of a great car like a Tesla essentially becomes zero because it can generate income daily, what do we think will happen to Tesla sales?
Big news: The MK30 was just released.
It sounds like some kind of advanced tactical weapon. But it’s not. We’re talking about Amazon’s new delivery drone. Here it is:
The MK30 Delivery Drone

Source: Amazon
Amazon revealed this just a few days ago. It will become the next-generation drone for Amazon’s Prime Air delivery services.
As a reminder, Amazon’s Prime Air service was announced years ago and is currently conducting pilot operations. The service is designed to deliver small packages of five pounds or less within 30 minutes of order. How’s that for convenience?
Right now, Prime Air is operational in two cities: Lockeford, California and College Station, Texas.
These are the only two cities in which Amazon has approval from the Federal Aviation Administration (FAA) to conduct drone deliveries. So we can think of them as early test deployments.
Safe and successful drone deliveries in these markets will warm the FAA up to a nationwide certification. Amazon’s end goal is to get approval for drone deliveries at the national level.
The MK30 is an advanced version of the drone Amazon’s been using. It has a longer range. It’s quieter. It can fly up to 50 miles per hour (mph). And perhaps most importantly, the drone can operate in the rain, which is critical to a consistent delivery service. After all, it’s not always sunny everywhere.
Amazon’s drones also don’t have to land to deliver a package. They descend to a height of several feet off the ground and drop the packages from there. Then they fly back to the warehouse for the next delivery.
What an incredible convenience for those fortunate enough to be in a service area.
If there are any readers of The Bleeding Edge who happen to receive Prime Air deliveries, I would love to hear about it. And if you would be willing to provide any pictures, even better. Please write to me right here.
Either way, Amazon expects the MK30 to be ready for widescale commercial use by 2024. This suggests that we may see a larger FAA approval by then.
At that point, many more of us may experience the convenience of 30-minute drone deliveries as part of the Amazon Prime service. And presuming this technology is widely deployed, it will likely reduce surface traffic of Amazon’s delivery vehicles.
The Broad Institute of MIT and Harvard just published brand-new research revealing what’s likely a major breakthrough in CRISPR genetic editing technology.
As regular readers know, CRISPR is like software editing for DNA. I’ve always likened it to the ability to “cut” and “paste” DNA sequences.
That’s because the CRISPR-associated enzyme cuts the DNA in order to insert a healthy genetic sequence. Doing so removes an unwanted genetic mutation.
But that’s only half true now…
The Broad Institute’s research paper outlined a new genetic editing tool that can insert long DNA sequences into human cells. And when it says long, it means it. We’re talking as many as 36,000 base pairs.
And here’s the key: It can do this without cutting the DNA.
This is the breakthrough. CRISPR is no longer a cut-and-paste model. Now it’s just PASTE. That stands for “programmable addition via site-specific targeting elements.” We can think of this as a “drag and drop” model.
Here’s why this is so important…
When CRISPR cuts DNA, the body has to go into DNA repair mode. There are some risks involved with that.
There could be what’s called “off-target editing.” That’s where unintended genetic modifications occur. There’s also the risk that the body doesn’t fully repair the DNA. That can lead to other problems down the road.
This new approach potentially eliminates those risks. It inserts the desired DNA sequences – in the correct location – without making any cuts.
Naturally, the industry has been buzzing over this latest research since it was published.
If PASTE proves to be effective in clinical trials, it will be absolutely transformational in the industry. Not only will it get rid of unwanted effects, but it could potentially treat even more challenging diseases of genetic origin.
Given how promising this is, I’m almost certain a company will be formed around this technology. Probably within the next 12 months.
I’ll be watching for that very closely. I’m sure such a company would attract strong venture capital (VC) funding. And it could very well be an incredible investment target for us at some point.
So I’m very excited about this. Outside of therapeutic progress, this is certainly the most exciting research I’ve seen around genetic editing tech all year.
We’ll wrap up today with a fun development.
We had a look at the work MyHeritage is doing back in May. The firm is taking AI – specifically generative AI technology – and bringing it to the field of genealogy.
First, MyHeritage built a platform that allows users to upload old photographs of family members or even historical figures so they can have them digitally reanimated. Once uploaded, the AI generates a modern avatar of the person, complete with realistic facial expressions.
And the company just added a fun feature. It’s calling it the AI Time Machine.
This feature allows users to upload a series of pictures, just like before. But this time, the AI creates images of the person in different historical time periods. Check this out:
AI-Generated Images of Michael Jordan 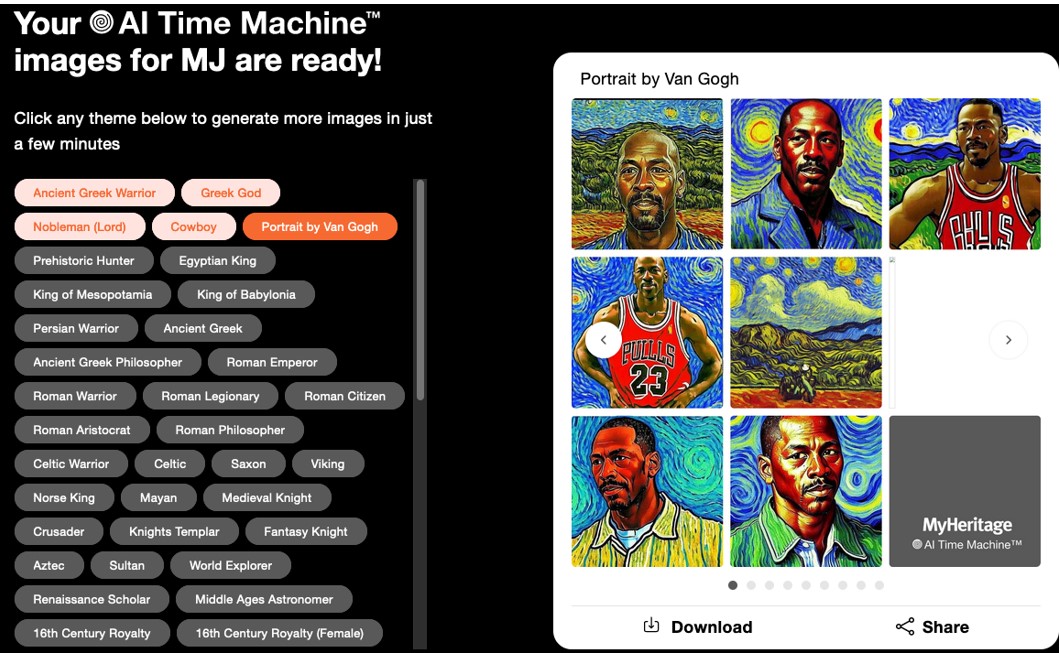 Source: myhertiage.com
Here we can see Michael Jordan depicted as a portrait by Van Gogh. The AI generated each of the images from scratch based on public domain images of Michael Jordan.
And we can see there are all kinds of other themes we can choose from. Ancient Greek Warrior… Roman Philosopher… Viking… 18th Century Royalty… the list goes on.
This feature has absolutely taken the internet by storm. Users have uploaded more than a million photos now.
And get this: The tool that powers AI Time Machine is none other than Stable Diffusion.
We talked about Stable Diffusion just last month, and we’ll have a look at a very exciting new development surrounding it in tomorrow’s issue of The Bleeding Edge. Stable Diffusion is a generative AI on par with work that Google, Meta, Midjourney, and OpenAI have been doing.
Now, MyHeritage is using Stable Diffusion’s tech as something of a lead generation tool.
Scores of people have flocked to MyHeritage’s website just to use AI Time Machine. Once there, MyHeritage requires users to create an account. Then it displays its suite of in-house genealogical offerings. I’m sure MyHeritage has picked up plenty of new customers thanks to this approach. Smart.
So this is the perfect example of a business leveraging generative AI.
And for anyone who would like to give AI Time Machine a try – it’s absolutely free. MyHeritage allows us to generate up to 40 images at no cost.
Regards,
Jeff Brown
Editor, The Bleeding Edge
The Bleeding Edge is the only free newsletter written by Silicon Valley insider Jeff Brown. Discover the technology that’s shaping our future, and the investing trends that need to be on your radar…

The Bleeding Edge is the only free newsletter written by Silicon Valley insider Jeff Brown. Discover the technology that’s shaping our future, and the investing trends that need to be on your radar…
Protected by copyright laws of the United States and international treaties. This website may only be used pursuant to the subscription agreement and any reproduction, copying, or redistribution (electronic or otherwise, including on the World Wide Web), in whole or in part, is strictly prohibited without the express written permission of Brownstone Research.

Does AI dream of intergalactic cats? – The Express Tribune